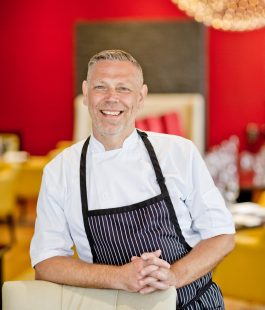 The i4C has partnered with Trius Winery Restaurant & Executive Chef Frank Dodd to create the perfect ‘farm to table’ summer menu, read on the learn more about Frank.

Born and raised in Bolton, England.  Frank became hooked on food whilst working at the local Farmer market whilst in school. After finishing culinary college Frank was given his start at hotels in both York and Newcastle upon Tyne, England.  After 4 years he was given the opportunity to go and work in Australia at Burnham Beeches. A stunning Art Deco Relais & Chateaux property in NSW. After 2 years Dodd returned to the UK to work in London, gaining experience at the Savoy and Dorchester Hotels before moving out of London to take his next role at the luxurious 1-star Michelin Cliveden Hotel in Berkshire, England.

Moving back into London after 3 1/2 years Dodd began working at the renowned Berkeley Hotel.  After 2 year he was given the chance to be the sous chef at the prestigious Relais & Chateaux, White Barn Inn, Kennebunkport, Maine. Hard work was rewarded with a sous chef role in Amsterdam, Holland at the Sofitel Legend The Grand Hotel.

With the itch still to travel Frank set of on his next culinary journey moving across the pond again to work in Canada.  Setting up in Toronto to open Biffs Bistro with Oliver & Bonacini. The lure of the West drew him out to Vancouver to take the reins as Executive Chef at The Wedgewood Hotel. After 3 wonderful years in Vancouver Dodd return to Ontario to head up the kitchens at the Beautiful Relais & Chateaux, Langdon Hall Hotel where he gained 5 diamonds for the restaurant.

Frank has been working in his current role for Andrew Peller ltd at Trius Winery Restaurant for over 14 years.  He heads up the restaurants at both Trius Winery and Gretzky Estate Winery and Distillery.  Finally settling down in Niagara with his wife Katherine and their beautiful daughter Charlotte in what he believes to be one of the most beautiful place to live and work.