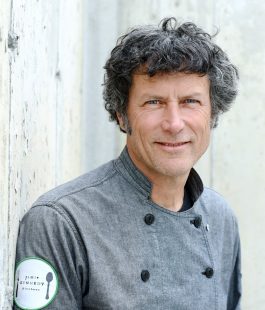 About Chef Jamie Kennedy
For nearly three decades Jamie Kennedy has been instrumental in shaping the culinary landscape in Canada. His innovative approach to gastronomy, commitment to sustainable agriculture and advocacy of local food have been unwavering.

Jamie’s career began with an apprenticeship in cooking at the Windsor Arms Hotel in downtown Toronto. This was a 3 year commitment that combined on the job training with classroom time for theory and business skills.

Following the completion of his apprenticeship the owner of the hotel, George Minden, hired Jamie as his personal chef at his home in Gstaad, Switzerland. Following his stay with Minden, Jamie enjoyed a two year period as a journeyman. He worked at a number of establishments under different chefs throughout Europe and honed his craft and approach to classical French cooking. It was during this time the budding chef forged an important and long-lasting friendship and working partnership with Michael Stadtlaender.

Returning from Europe in 1979, Jamie and Michael were hired as co-chefs at a restaurant that was to become Scaramouche. The brainchild of Morden Yolles, Scaramouche, under the leadership of Kennedy and Stadtlaender quickly became a gastronomic beacon in the landscape of Toronto restaurants. Jamie recalls sitting at a window seat at the Park Plaza Hotel’s rooftop lounge (now the Park Hyatt) after dinner service and writing the following day’s menu.

In 1985, following his tenure at Scaramouche, Jamie opened his first restaurant on College Street, the now famous Palmerston Restaurant. With its intimate dining room and open-concept kitchen, Jamie executed seasonally driven French bistro-style dishes further establishing him as one of the most influential chefs in the country.

In 1989 Jamie co-founded Knives and Forks which helped pioneer farm-to- table practices nationwide and has continued to foster important ties between farmers and chefs across Ontario. Each year Knives and Forks hosts its Feast of Fields fundraiser which brings together artisans, local farmers, wineries and chefs in a celebration of the now burgeoning slow food movement.

In 1994 Jamie Kennedy at the Museum, JK ROM opened to critical and commercial acclaim. JK ROM ushered fine dining during the lunch hour to Toronto’s downtown core. With Jamie’s new catering business, the venue became one of the most popular destinations for private events utilized by the likes of the Toronto International Film Festival, Alliance Atlantis as well as by private clients.

During a major reconstruction of the Royal Ontario Museum, Jamie took a well-deserved hiatus purchasing farmland in Prince Edward County. Focusing on planting his own vegetables and herbs, raising livestock as well as cultivating a vineyard with Pinot Noir grapes Jamie was ready to shift gears.

In 2003 Jamie Kennedy Wine Bar opened at 9 Church Street. The now famous address was originally home to a sushi bar which was transformed into an open style kitchen, echoing Jamie’s first restaurant, The Palmerston.

In 2006 Jamie was once again at the helm as executive chef at Bloor and Avenue Road, this time with Jamie Kennedy at the Gardiner. After a successful fundraising campaign that drew monies from both the public and private sectors, the newly renovated Gardiner Museum of Ceramic Arts turned its third floor glass pavilion into a fine dining lunch venue.

Its floor to ceiling windows and impeccable view of the Royal Ontario Museum and University of Toronto continues to attract some of the most exclusive events in the city.

In 2010 Jamie was the recipient of two major appointments. A Governor General award for the inaugural Nations Table in the category of Leadership shared with Michael Stadtlaender. Secondly being invested in the rank of member of the Order of Canada for his work in developing regional identity in food culture across Canada.

in the coming years, Jamie looks forward to cultivating his farm and vineyard with plans to open a tavern on his farm in Prince Edward County.

Throughout his remarkable career, Jamie has applied the slow food philosophy in every aspect of his downtown restaurants and flourishing catering business. His seasonal methods of cooking and involvement with the local food movement continue to inspire progress in agricultural and gastronomical communities across Canada.