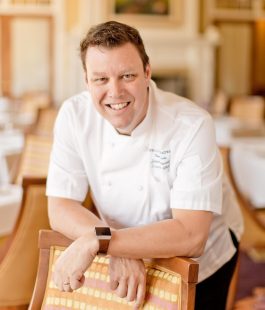 About Chef Jason Parsons
Executive Chef Jason Parsons has brought his passion of local food and wine to one of Canada’s most renowned wineries. The Winery Restaurant at Peller Estates has gained recognition as one of the definitive wine and food destinations in Niagara-on-the-Lake, Canada’s premier wine region.

Recognized as one of Canada’s preeminent Chefs, Parsons is inspired by the bounty of Niagara’s ingredients from local farmers. Jason takes pride in combining his fine-dining experience with fresh, locally produced ingredients. He is a staple in the culinary industry and has inspired and changed the dining world in Canada and abroad.

Chef Parsons brings over thirty-five years of culinary experience to the Peller Estates Winery kitchen that he has gathered from some of the world’s most celebrated restaurants, fusing his support of local Canadian ingredients with his eye for detail. Today, Chef Parsons works closely with Peller Estates’ Winemaker Katie Dickieson, creating inspired cuisine that marries perfectly with the wines of Peller Estates having received numerous culinary accolades such as 4-Star rating from Toronto Life, and being invited to cook in New York at the legendary James Beard Foundation.

Jason is also recognizable as a familiar television personality. For seventeen years he has been a Guest Expert on the popular TV show CityLine, entertaining and informing viewers across Canada and Chef Parsons collaborative cookbook with fellow chefs Massimo Capra and Michael Bonacini; 3 Chefs: The Kitchen Men.

In 2019, Chef Parsons was presented with an honourary Bachelors in Applied Science from Humber College in recognition of significant contributions to society and outstanding accomplishments in the culinary field. Now Jason is in his sixteenth year at Peller Estates and is continuing to focus on awakening the palates of those that dine in his restaurant.