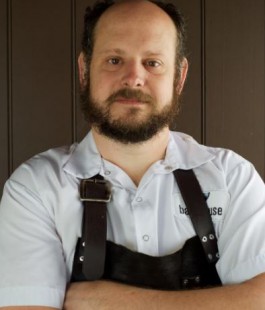 About Ryan Crawford
Executive Chef | Owner
Some people are born to do what they do, that is true of Chef Ryan Crawford.

Ryan has been involved in the kitchen his entire life. He studied at the noted Stratford Chef School and then became an instructor there for four years. He has travelled extensively, staging at The French Laundry and Terra Grill in Napa Valley; l’Orangerie, Lucques and Patina in Los Angeles, and Jardinière in San Francisco.
Closer to home, he has worked with Michael Stadtländer and Jamie Kennedy.

Ryan solidified his place in the Canadian culinary scene as Executive Chef of the Stone Road Grille in Niagara on the Lake. It was during this time that he and his good friend Paul Harber of Ravine Vineyard Winery began farming together. Ryan and Paul brought The Happy Pig Farm to Niagara.

Eventually he opened Backhouse and focused on Integrated Cool Climate Cuisine.  Backhouse was a labour of love and helped solidify Chef Crawford’s love of farming.
COVID put out the fires of Backhouse.  But sparked the flame in Chef Crawford’s soul to return to his original love…Italian Cooking.
He and his partner Martha Brett are now found welcoming friends and family nightly at Ruffino’s Pasta Bar & Grill!