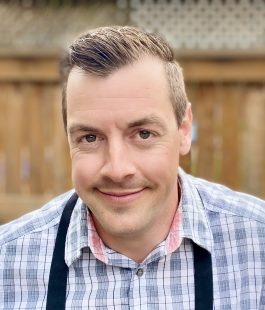 Born in Niagara Tim was introduced to the world of food and wine at an early age. Tim’s father is a Vineyard Manager, so growing up he was surrounded by the knowledge of winemaking and viticulture as his first job was in the fields and cellars of a winery.
Eventually he transitioned into a professional kitchen as an apprentice, working in top establishments throughout the Niagara region. After years of working in the area, Tim made a move to gain international experience. During his travel abroad he worked in multiple kitchens, as well as farmed livestock and produce. This new perspective further developed an admiration for where our food comes from and how to utilize our produce, which led to an appreciation for “honest food”, and a respect for top quality ingredients.

Upon his arrival back to Canada Tim accepted the Executive Chef position with Arterra Wines and began to build a robust culinary program within the country’s biggest wine brands. He spent 10 years with Inniskillin and Jackson-Triggs and was able to develop their business, as well as broaden his culinary portfolio and wine knowledge. Tim received his WSET level 3 qualifications in 2017, has been featured in multiple forms of media publications, TV productions, a guest chef for industry events and fundraisers, and is also a recipient of the OHI top 30 under 3