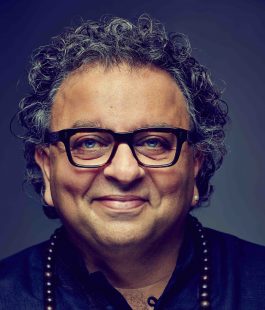 Special Culinary Guest Chef at i4C 2013
Vikram Vij was born in India in 1964 and lived in New Delhi and Bombay until the age of 20, when he went to study, live and work in Austria. While he was there he received his chef certificate from the Salzburg Hotel Management School.
Vikram moved to Canada in 1989 to work at the Banff Springs Hotel in Alberta.

Vikram opened Vij’s restaurant in Vancouver in 1994, with Meeru Dhalwala joining him soon after to collaborate on a menu that would change the landscape of Indian cuisine in Canada. Using traditional Indian methods, spices and culinary influences, and pairing them with sustainable, local produce from British Columbia, they created one of the best-known and most beloved Indian restaurants in North America.
Vikram’s first solo restaurant, My Shanti, opened in South Surrey in 2014. Located at the destination shopping location Morgan Crossing, My Shanti pays homage to Vikram’s travels around India.
Vij’s Sutra gives Indian food lovers in Victoria, BC an opportunity to experience Vij’s food at the Victoria Public Market throughout the day.

Vikram became a certified sommelier from the International Sommelier Guild in 2000, and is passionate about pairing wines with his cuisine.