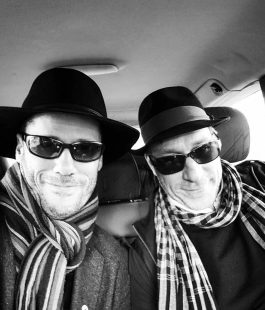 Purchase your favourite cool VQA Chardonnay, gather your bubble, bring your burning wine questions, and tune in for a mostly fun, but accidentally educational cocktail hour featuring the world’s most planted fine wine white grape and a top performer in Ontario vineyards.

About Michael Godel
Michael Godel is a wine writer, critic and partner at WineAlign.com. He processes his thoughts about wine, travel, music and pop culture at godello.ca.

Godello hung up his 25 year-old chef’s whites after joining the team at Toronto’s Barque Smokehouse in March of 2011 and is currently Wine Director of the two Toronto restaurants. He is a Canadian ambassador and educator for the Consorzio Vino Chianti Classico, Brunello di Montalcino and Vins de Bourgogne. Godel is a judge for the annual WineAlign National Wine Awards of Canada, the Ontario Wine Awards and Canada’s Great Kitchen Party. He lives in Toronto with his wife of 25 years and three children.

About John Szabo, MS
Master Sommelier John Szabo was the first Canadian to add the “MS” after his name in 2004, and he holds the WSET Diploma with honours. Today, John is a partner and principal critic for WineAlign.com, Canada’s largest wine publication, and buyer for the WineAlign Exchange wine club, as well as columnist at Modalina and MarQuee magazines. Most recently, he joined the team at CellArt as content contributor (words and wine!), a company fusing art and design with function in one-of-a-kind luxury wine cellars.

John is co-host of the newly launched podcast Wine Thieves with WineAlign partner Sara d’Amato, and also contributes occasionally to Wine & Spirits Magazine and freelances for publications such as Meininger’s, Wine Enthusiast, Canopy, and VinCe Magazine.

His latest book, Volcanic Wines: Salt, Grit and Power, earned critical acclaim including the André Simon award for best drinks book. On the consulting side, John builds wine programs across Canada, and is currently sourcing wines for Accor/Fairmont/Sofitel Hotels in Québec. He speaks regularly in Canada and internationally and (used to) spend many weeks each year travelling wine country worldwide to keep on top of this fascinating industry.