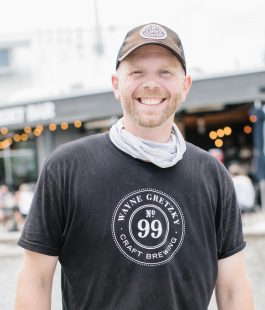 Chef Desharnais is part of the culinary experience of Chardonnay in the Vineyard.

About Chef Desharnais, Executive Chef, Wayne Gretzky Estates Winery and Distillery
Chef Maurice Desharnais is a Niagara local, who began honing his culinary skills at Algonquin College in Ottawa. Shortly after moving to Niagara-on-the-Lake, Desharnais was appointed Executive Sous Chef of Peller Estates Winery and has been with the industry leader Andrew Peller Limited for over fourteen years. Over these years, Maurice has helped raise the profile of Peller Estates. In January 2019 Maurice left Niagara and moved to Beautiful Kelowna British Columbia to oversee the restaurant renovation of Gray Monk Estate Winery. He spent the next year and a half, working with local farmers and producers showcasing the beauty and bounty of the Okanagan. Having completed the overhaul with the kitchen, menu and the restaurant at Gray Monk, he came back to his home in Niagara and took over the Executive Chef position at Wayne Gretzky Estates Winery and Distillery. Completing his second-level sommelier, starting his Beer Certification, receiving his Fromagerie as well as participating on Food Networks Chopped Canada.

Maurice’s culinary philosophy and passion are strongly influenced by his Northern upbringing. He is known to bring an elevated approach to traditionally Canadian and rustic cuisine. Maurice prides himself on creating simple, uncomplicated food. Maurice shows his Canadian values through a no-quit attitude and support of sustainably sourced Canadian ingredients.

At Wayne Gretzky Estates, Maurice has transformed three different restaurants into fun, casual dining spots that showcase the winery and distillery’s iconic products in new ways. The relaxed and delicious menus offer a new way to experience the estate’s wines, whiskies, and beers.