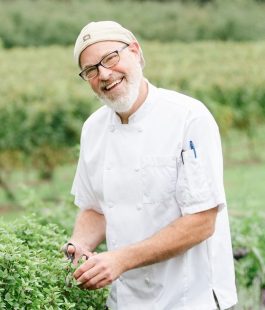 Chef Midgley is part of the culinary experience of Chardonnay in the Vineyard.

About Chef Ross Midgley, Executive Chef, Riverbend Inn & Vineyard
Raised in Prince Edward Island, Ross grew up around honest hospitality. His mother absolutely hated cooking but was, nonetheless, a consummate entertainer and from a young age he learned the intricacies of hosting a good party. He likes to refer to himself as a ‘born-again Chef’, having turned to the stoves after a couple of university degrees and stints in teaching, small business and banking. In 1996 he returned to his Charlottetown home to study at The Culinary Institute of Canada and has never looked back.

Soon after graduation, Ross moved to Niagara where he has worked in many of the area’s most renowned kitchens, holding the Executive Chef role in several. Ross has also been the Chef/Proprietor of his own place with his sommelier wife, Wendy – The Kitchen House at Peninsula Ridge.

Ross loves the full-service integration of food and lifestyle a boutique Inn affords, having spent months on ‘stage’ in Hampshire, England at the idyllic Chewton Glen Hotel & Spa. The acquisition and relaunch of The Riverbend Inn by Andrew Peller Limited is also a sort of homecoming for him as he was sous chef of our sister property, Trius/Hillebrand Estates from 2001-2005.

Motivated by all things ‘entertainment’, Ross is always on a quest for how to throw an even better party. When he is not cooking, Ross dreams of one day rock and roll stardom with his band, The Hopyards. He lives on a small farm in Niagara-on-the-Lake with his wife and three boys.