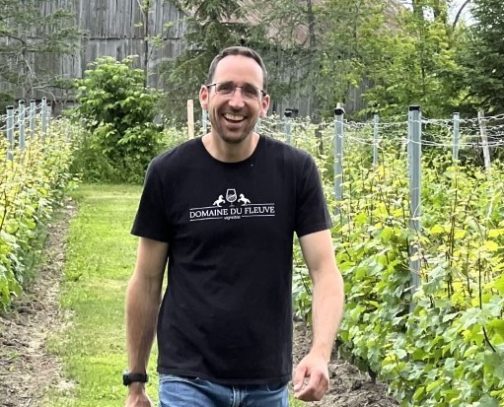 The St. Laurent River and its banks are anchored in the heart of the family Thomas. Walks, outdoor meals and gatherings at the river inspired the name of the estate in tribute to these unique moments.
Paul Thomas and Lorraine Pelletier, both doctors, have acquired a land of 60 hectares in early 80s in Varennes, adjoining the St.-Laurence River, on the south shore of Montréal. That field was used for growing wheat, soybeans and corn. In the early 2000s, Ms. Pelletier was looking for a project related to agriculture. Passionate about wine and after visiting several vineyards, the idea of growing vines were launched.
The Domaine du Fleuve winery started as a mother, father and son (Louis Thomas) project in 2007. The estate began with the plantation of hybrid vines. Few years later,
after good agronomic results it was decided to plant viniferas. It is now their son, Louis Thomas, who cultivates the 4 hectares of vines: “We grow around ten grape varieties, from Pinot Noir to Chardonnay, Cabernet Franc to Riesling, on clay soils. We are proud to discover, year after year, a little more of the character of these grape varieties.”

Rigour, Passion, Devotion. This is what Louis Thomas is doing to ensure the vineyard produces wines of exceptional quality. He is the winemaker since the very first year. First introduced to winemaking methods through education programs in Quebec, he has developed wines made at the domain, with the help of the oenologist Richard Bastien (Oenoquebec). Driven by curiosity, Louis Thomas is always seeking to push the limits further every day.
He sometimes says he’s manic, but that’s because he doesn’t leave any detail behind!

“Cool Climate Chardonnay is exceptional and vibrant! They have a lot of character and that’s what I like!”

Located on the south shore of Montréal Island, the vineyard was developed right next to the St. Laurent River. This proximity with the water source and the Montréal agglomeration brings a rather tempered climate to the domain lands. The soil is composed of a first layer of silty clay (4–6 feet) and there are friable rocks under. As for now, the winery uses Chardonnay grapes to produce a still and a sparkling wine. As the Chardonnay seems very well adapted to our terroir, it will be a significant part of the future plantations.