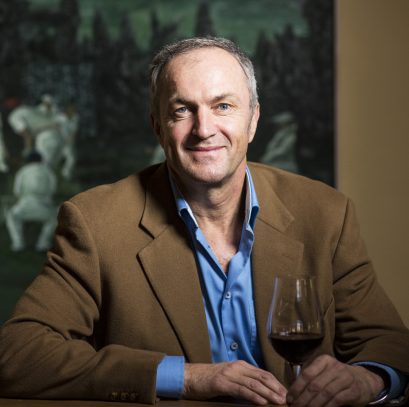 One of the most well respected names in the industry, the Hill-Smith family has been at the forefront of Australian wine for 170 years. Following the establishment of Yalumba in the Barossa by his great-great grandfather in 1849, Robert Hill-Smith has during the past 30-plus years invested in some of the most exciting estate vineyards in Australia and New Zealand.
At Hill-Smith Family Vineyards we seek to craft wines that reflect a thoughtful interpretation of grape, terroir and style. These are wines of individuality – that are both timeless and contemporary.

Our Tasmanian wineries sit in the highly acclaimed Pipers River region, in the Tamar Valley in the island state’s northeast.
The name Jansz Tasmania pays homage to Tasmania’s namesake, the Dutch explorer Abel Janszoon Tasman, who first sighted the island in 1642.
Our cool little corner is colloquially known as ‘Sparkling Tasmania’. The climatic conditions rival those of Champagne, and it was originally with French contribution that Jansz became Tasmania’s first traditional-method sparkling. Today, we call it Méthode Tasmanoise.

Dalrymple Vineyards, one of Tasmania’s leading boutique wineries, was established by Bertel and Anne Sundstrup in 1987. They were visionaries, travelling to France for inspiration and guidance.
The original vineyard overlooks the Bass Strait – the wild sea separating Tasmania from the mainland – and shares similar conditions to those found in Burgundy.
Dalrymple Vineyards crafts some of Australia’s most distinctive cool climate Chardonnay and Pinot Noir, with complex characters, weight, texture and flavour.

Nick graduated with a Bachelor of Commerce in 1983 from the University of South Australia and a postgraduate in Strategic Marketing in 1992 from Sydney University. For the first 18 years of his career, Nick worked in the IT industry for companies including NCR, AT&T, Optus and Gemplus in various sales management, product management, strategic planning and general management roles. In 2014 Nick completed the Australian Institute of Company Directors program.

In 2003 Nick joined Negociants Australia as General Manager, managing a portfolio of specialist imported wines and domestic brands. In 2010 he was appointed as Director of Strategy and Trading where he was responsible for the distribution of more than 150 equity and agency brands. In September 2014 Nick assumed the role of Chief Operating Officer of Yalumba, immersing himself in all aspects of the business.

In March 2015 Nick became Yalumba’s first non-family Managing Director and set the business on a course to operationally contemporise Yalumba in preparation for future generations.

Nick has both a personal and professional passion to seek change and create a more collegiate Australian wine community. In 2016 he was appointed Vice President of the South Australian Wine Industry Association. Since 2017, Nick has been a member of the Wine Australia Export & Regional Wine Support Marketing Advisory Group.

“I love the elegance that comes from cool-climate winemaking. Our Tasmanian wineries, Jansz Tasmania and Dalrymple Vineyards, thrive on the challenge of crafting Chardonnay in harmony with one of the world’s most unique and rugged environments.”

The primary influence for both Jansz Tasmania and Dalrymple Vineyards is the Bass Strait, the body of water that separates Tasmania from mainland Australia.
The sea temperature ranges from 12°C in the winter to 17°C in the summer, having a cooling influence on the northwesterly winds that pass over the vineyards. This airflow moderates summertime temperature, helping to extend the season for slow ripening and intense, delicate and refined flavours. It also increases average humidity and provides the occasional coastal rainfall during summer. The proximity to the sea and the slope of the vineyards also helps minimise frost incidence during the sensitive springtime period.

Established in 1986, Jansz Tasmania specializes in crafting luxury sparkling wines. Louis Roederer recognized the similarities of the Tasmanian climate to that of Champagne and planted Pinot Noir and Chardonnay vines. It was his foresight that led to the first Tasmanian vintage sparkling wine in 1986 using traditional méthode champenoise, a tradition that has continued today.

The Vineyard:
The Jansz Tasmania vineyard sits to the northeast within the Pipers River region of the Tamar Valley. This cool little corner is colloquially known as ‘Sparkling Tasmania’.
Resting on a bed of pure, red, free-draining basalt soils, the Jansz vineyard truly is the perfect site to grow grapes for world-class sparkling wines.

Jansz Tasmania Single Vineyard Vintage Chardonnay:
100% Chardonnay, this sparkling wine is made with a single focus and a commitment to the heritage of Jansz Tasmania as a Chardonnay-dominant house.
The wine hails from one tiny, exceptional block of Chardonnay on a deep slope facing north with a direct and magnificent view of Bass Strait. The block is hand-tended and kept separate, whole bunch pressed with only the finest of first juice retained, just 9 barriques blended and tiraged for almost 5 years. Intensely flavoured fruit is balanced with a lingering natural acidity, a Tasmanian signature.

Dalrymple Vineyards was established by Bertel and Anne Sundstrup in 1987. It was the hills overlooking Bass Strait that made the site unique and inspired the Hill-Smith family to purchase the vineyard in 2007, in their pursuit to produce some of Australia’s most distinctive cool-climate wines.

The Vineyard:
The Dalrymple vineyard is just over 6 kilometres from Bass Strait. The soils have a large quantity of basalt rocks that provide good drainage of water through the profile, while allowing vines to penetrate to great depth, accessing water in dry conditions.

Dalrymple Cave Block Chardonnay:
The Cave Block Chardonnay is sourced from blocks that are located on a hillside facing northeast. The slope is quite steep with the foot at 87 metres and the top of the hill at 163 metres. These blocks are approximately 4 ha in area. Latitude: 41.08, Longitude: 147.18.
The fruit from the estate gives the Cave Block Chardonnay naturally higher acidity, with concentrated elegant fruit characters from the deep loam soil, old vines and cool maritime climate.