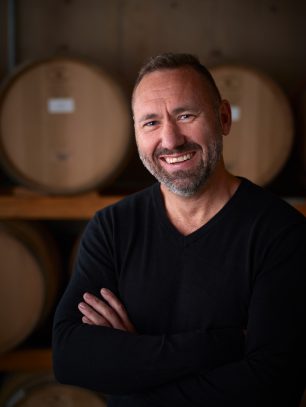 When you pick up a bottle of Jackson-Triggs, you can be sure you made the right choice. Jackson-Triggs is a name you know. It’s a name your friends know. It’s a name that stands for our commitment to crafting the perfect wine for any occasion, and our attention to detail shows. We are Canada’s most awarded winery and have been named “Best Canadian Winery” an unprecedented number of times in international and domestic competitions. You can feel proud when serving Jackson-Triggs wines in knowing that, no matter the varietal, vintage, or region, you’ll be pouring a premium wine that pairs perfectly with every moment, large or small.

Born in a small town outside of Adelaide, Australia, Levi de Loryn grew up surrounded by vineyards and had a natural curiosity for the winemaking process.
After Levi received his degree in Food Technology and Microbiology at the University of South Australia, he landed a cellar position at Château Yaldara in the Barossa Valley. Yaldara is the Aboriginal word for sparkling, which coincidentally is Levi’s true passion, sparkling wines. In his eyes, they are “complex and challenging, but done right can be magnificent, and so rewarding.”
He then switched gears and moved into the laboratory as a Senior Wine Analyst at Hardy Wine Company. During that time, Hardy’s was acquired by Constellation Brands, and this afforded Levi the opportunity to work a harvest as a cellar hand at Blackstone winery, in Sonoma Valley, California. He later moved back to Adelaide, Australia to work as Senior Wine Analyst & Vintage Cellar Hand at Constellation Brands.
Levi took a break from the wine industry and travelled to Japan to teach English for a couple of years, where he met his soon to be Canadian wife, Tracey.
Once back in Australia, he completed his Masters of Oenology at Adelaide University and went on to work with his wife at Wither Hills Winery in Marlborough where he gained invaluable experience. In 2010, he moved to Canada to work at Flat Rock Cellars, which gave him valuable experience working at a smaller scale winery, where fruit was hand sorted and selected and he learned to appreciate the quality of a gravity fed winery. He then returned to Australia for another vintage in the heart of the Barossa Valley, working as Senior Cellar Hand at St. Hallet Winery, where he worked with some bold reds and got to experiment with some of Australia’s oldest vines.
Since 2011 Levi has been using his expertise in the Niagara region where he’s worked as Assistant Winemaker at Rockway Glen Estate Winery, and then Associate Sparkling Winemaker at Angels Gate Winery & Kew Estates Winery as well as Sparkling Wine Consultant & Processing Manager for Millesime. In late August of 2018, Levi joined Arterra Wines Canada as Estate Winemaker for Jackson-Triggs Winery in Niagara-on-the-Lake.
His interests span from cooking and travelling, to microbrews and all facets of wine. With international experience in winemaking and a speciality in sparkling wine production, Levi “was always destined to be a sparkling winemaker.”

Terroir, but mainly the cool temperatures at night during the ripening season of Chardonnay, this helps to promote the Cool Climate characteristic flavours and acidity in the fruit.