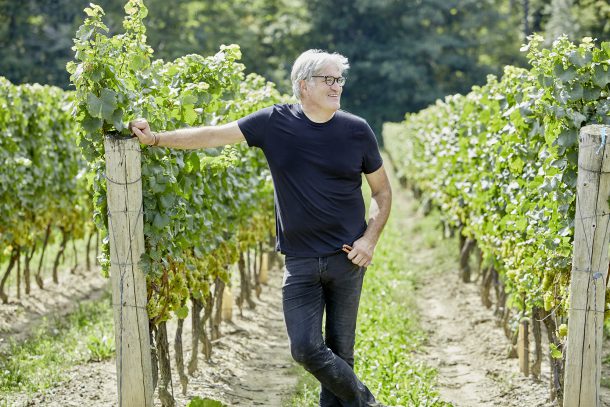 One of the furthest great bench vineyards from the lake, some five kilometres from the hustle and bustle of the QEW highway and the Jordan Harbour, the Le Clos Jordanne Vineyard sits quietly on the Jordan Bench, surrounded by its own Clos of Carolinian forest.

The challenge was to proceed to look for THE best plot of land within the Le Clos Jordanne vineyard to make Le Grand Clos. Similar to the Grand Cru tier in Burgundy, we are doing a ‘vineyard-within-a-single vineyard’ approach. After several years of listening to the wines, and walking the vineyards, it became obvious that the western side of Le Clos Jordanne gave the wines of the most striking potential for showing, breeding silkiness, length and longevity. Fermented with indigenous yeasts and long-aged in barrel before bottling, the cuvée is tasted meticulously, barrel-by-barrel, with only the most ‘transparent’ barrels retained … those that support but ‘stay out of the way of the terroir.’

Our mission here is to home in on the ‘filet mignon’ of the Clos Jordanne vineyard. Simply our finest expression of the Jordan bench Terroir.

Thomas Bachelder is an internationally recognized Canadian winemaker - and Le Clos Jordanne’s original founding winemaker - with a specialty in the production of cool-climate Pinot Noir and Chardonnay. His terroir-revealing wines with distinct, complex minerality helped to propel a young Niagara region into the global spotlight in the mid to late 2000s. His efforts were instrumental in showcasing how old world, Burgundian winemaking techniques employed on new world terroir - with minimal intervention - could produce exceptional wines.

Originally from the dairy farming belt east of Montreal, Quebec, Thomas grew up on his family’s farmland, helping to foster a love of agriculture from a young age. In 1985, Thomas was first introduced to winemaking when he received a “Beaujolais-style” home winemaking kit for Christmas. Originally interested in winemaking as a hobby, it was his honeymoon trip to Burgundy with his wife, Mary Delaney, that inspired him to become a full-time winemaker.

His career began in 1992 when he moved to Burgundy to work as a winemaking assistant for two esteemed Domaines, Domaine de la Créa, Bligny-lès-Beaune and Domaine Marius Delarche, Pernand-Vergelesses. Following this and a stint in Oregon, he was invited back to Burgundy to join the historic Château Génot-Boulanger where he was able to introduce some new world winemaking notions, into one of the old world’s most traditional villages. A move back to Oregon in the late 90’s saw Bachelder create some of the greatest Pinot Noirs in the state during four vintages at Lemelson Vineyards.

In 2003, Bachelder became the founding winemaker of Le Clos Jordanne. Enamored by the Burgundy region, Bachelder had been hesitant about making wine in Ontario, but he quickly fell in love with the unique nature of the project and the limestone-laced, micro-climate of the Jordan Bench. Le Clos Jordanne became a passion project and he viewed it as an incredible opportunity to put Canada on the winemaking map.

Leveraging a decade’s worth of experience obsessing over the marriage of new and old world techniques, Bachelder and Le Clos Jordanne won almost immediate attention and praise. In 2009, the 2005 Claystone Terrace Chardonnay generated global recognition after winning first place in the Judgement of Montreal competition. It was only the second wine he had produced at Le Clos, earning Bachelder Winemaker of the Year in that year’s Ontario Wine Awards.

Bachelder left Le Clos Jordanne in 2010 and continued to produce world-class examples of cool-climate wines in Oregon, Burgundy and Niagara, under his own label, Bachelder. He recently added a new varietal, Gamay, to his portfolio. His technique continues to showcase the personality of the region, with little winemaker intervention and extended time in the barrel. Now, Bachelder will return to execute the rebirth of Le Clos Jordanne, bringing with him his immense knowledge of this particular vineyard, his passion for the region and his unique, terroir-focused style.