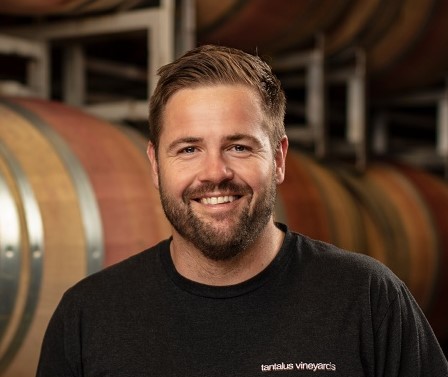 Today, 1978 plantings of Riesling and 1985 plantings of Pinot Noir, Chardonnay and Pinot Meunier make up the backbone of the 75-acre estate.

Tantalus’ sleek and modern facility was opened in March of 2010 and has the distinction of being British Columbia’s first and only LEED-certified winery.

David Paterson fills the shoes of Tantalus’ Winemaker and General Manager. David is a Kiwi with a Canadian connection, having been born in Vancouver. He received his winemaking degree from Christchurch’s Lincoln University and following time spent working in the local New Zealand industry he travelled the wine world gaining experience at premium wineries in Oregon, France and Australia.

He landed at Tantalus in 2009 and with seven successful vintages under his belt at the winery, he took on the additional role of GM in 2016. Prior to joining Tantalus, David was working with celebrated South Australian producer Henschke Cellars.

“I love cool climate Chardonnay because it expresses terroir so well, and when handled gently, it undeniably showcases some of those great pillars of wine: minerality, elegance and ageability.” David Paterson

At Tantalus we have always strived to express vintage and vineyard in all our wines, and as a single-vineyard producer, we are fortunate that our site provides us with the ideal growing conditions for high quality, cool climate Chardonnay.

Situated in South East Kelowna on a western aspect, our property features three unique blocks of Chardonnay – each one farmed, harvested and fermented separately.

The backbone of our Chardonnay program was planted in 1985 to the Oppenheim clone – a unique German clone which offers our flagship Chardonnay incredible minerality year after year. Since 2006, our plantings have grown to roughly 9 acres with the establishment of an additional 8 acres of primarily Dijon Clones 76, 95 and 548 vines.

Alluvial, granite-based soils express structure and minerality in our wines, while a large diurnal temperature differential ensures great ripening conditions without losing the bright acidity that we strive towards. In the cellar we employ mainly wild fermentation, extended lees contact and little to no additions. No batonnage is performed after primary fermentation and malolactic fermentation is only used when it occurs naturally.